Our deal with our children is they can watch as many movies as they like, as long as they she’ll peas at the same time!

Here are the results:

We planted about one hectare of cow peas this year, and they did quite nicely with all of the rain. We are harvesting enough peas to keep us in bean soups and so on through the winter.

Our boer goats will eat the rest probably next month, before the plants dry too much. It will make a good, high protein green feed before they lamb in July.

We will also combine the peas with our tomato crop and make ‘baked beans’ as a preserve.

I haven’t posted much lately due to general busyness, but we have baled our lucerne, weaned our lambs and been busy with a number of other projects.

One of which has been building a tunnel over our Tilapia dam before winter arrives and freezes them, and to try and keep our tomatoes going for as long as possible into the winter.

Our winter at 1600m is generally quite temperate during the day, but can drop below zero at night. The fish dam inside the tunnel will provide the thermal mass ro prevent our seedlings freezing overnight.

Some pics (our old seedling greenhouse in the background):

This year we will have our best tomato crop ever! We spent the weekend tying up the plants to lift the fruit off of the ground. We actually left it too late as we managed to break quite a few branches off as they were alreafy too heavy with green tomatoes. I always use sisal string in the garden as it is biodegradable, and next season will be gone. (Rather than plastic string and wire everywhere).

These we’re grown as seedlings and then planted out into out thick straw mulch bed. They survived the scorching temperatures over December and January and are now thriving in the recent rain we have had. 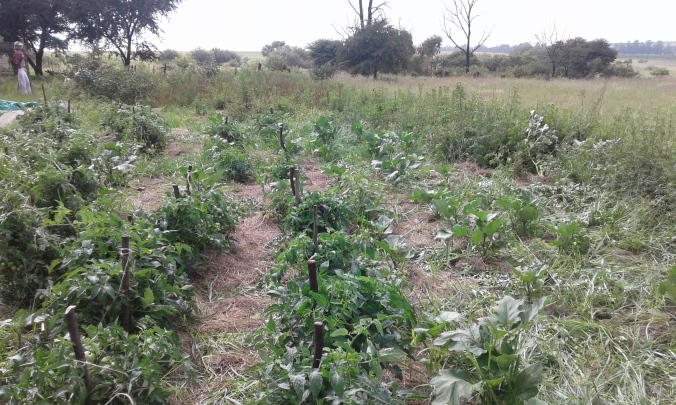 I would like to use biogas for cooking in the house, so I built a pilot project to check if and how it works. We have the feedstock, being goat manure so I decided to give it a try.

I wasn’t going to spend any money on the project, so I built a crude digester out of junk lying around on the farm. It comprises a 220 litre drum filled with goat manure slurry, a 100 litre drum upended in the larger drum with a valve and a rock on top, and a piece of gas pipe, wedged into the valve with a plastic bag. Behold its precision engineered glory! 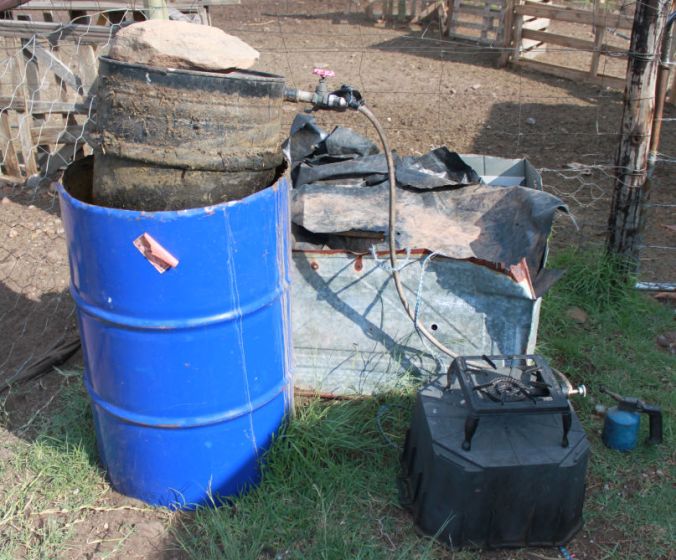 I filled the big drum about one third full with goat manure, topped up the drum with water and mixed it up into a nice slurry. I then put the small drum upside down inside, covered it with black plastic and waited.

For a week nothing happened.

In the next week the smaller drum started to lift a little, but the gas produced did not ignite.

In the following week a foul stench was noted.

And after about 3 weeks the contraption was producing gas every day, and I could make flares of gas flame out of the pipe.

Apparently the bacteria first ferment the mixture to produce CO2, then H2S is produced and finally methane production commences as the methane producing bugs establish themselves.

The next test was to see if anything useful could be done with the gas, so I connected up a camping gas cooker, but it wouldn’t light. It took a lot more google research to figure out that biogas (being mainly methane and carbon dioxide), behaves quite differently to your normal propane or butane gas that you buy in cylinders.

An important difference is that propane and butane liquify under pressure, so they occupy a lot less space as a liquid than as a gas. You can’t compress methane into a liquid, so you need relatively large storage volumes. Methane’s burning characteristics are different so you can’t just use a normal gas burner, it needs some tweaking.

I then bought a small one ring cooker that I could modify. What needs to be done is the jet needs to be opened up to much larger than for normal gas, and the amount of air restricted. I opened up the jet in the stove from about 0.5mm to 1.5mm, and blocked up the air intake with a piece of plastic with one 6mm hole drilled in it.

So, I opened up the gas, applied a match and hey presto! It works!

Next thing is to boil a kettle, which I duly did (OK, only 1cm of water in it, but it boiled nonetheless). You can’t see the flame or the steam in the pic, but it is boiling, trust me….

So I’m quite pleased that the experiment worked. The digester is probably making about 30 litres of gas per day, probably quite a lot is lost due to the small drum not filling nicely in the big drum.

My next step will be to make a 1000 liter digester so that we can use the single ring burner in the kitchen to make a cup of coffee in the morning. I am going to use the design from this website and see how it goes : Solar Cities IBC Digester

I will keep this digester bubbling as the bacteria are established in this system, so you can take this material to quick start the new system, without waiting for the whole process to establish from scratch again. Seeing as IBCs are fairly cheap, I will probably be able to get a small working system going for less than $50, hopefully enough to do some of our cooking on, but we’ll keep our normal gas stove as well. Based on the experience of this pilot system I would anticipate about 100 litres of gas per day from the 1000 liter system.

There are many variables that dictate how much gas a biogas system will produce, like type of feedstock, ambient temperature, water hardness and so on, which is why I wanted to see it work on a small scale first, but I am very pleased with the results!

I found these websites quite helpful in this process :

Biogas Plant in a Plastic Drum

Modifying a Gas burner for Biogas