Slangbos (snake bush, bankrupt bush) is a small shrub that invades grazing land. In cattle farming operations it can completely invade grass land and push out the grass entirely. This mainly occurs as it is not palatable for cattle so they don’t eat it, but they do remove the competing grasses.

Some people promote the use of poisons again Slangbos : Chemicals: the best weapon against slangbos. Goats, however, find Slangbos very tasty and readily graze the growing tips of the plant. So while they don’t eradicate the plant completely, as the stem is very woody, they do keep it under control so that grasses and other plants grow amongst the slangbos. I don’t see many new plants establishing, so I would imagine that after some time the goats may graze the plant so that very few remain. The area below was quite choked at a stage, and almost completely covered over but the goats have grazed it back and grasses are regrowing in between.

If you break the plant and smell it it is quite aromatic so I would think that it is probably quite nutritious and likely has medicinal properties.

Milk weed can be a problem as it grows quite densely where it established itself, and is not really grazed my any animals. Goats will eat the seed pods, and nibble on the leaves in winter, but it becomes problematic if it starts growing in any field that will be cut for hay. You don’t want as lot of weeds in your hay, as the weeds are generally wetter than the grass and may cause mould, and they may spread their seeds to other parts of the farm.

Fortunately when the ground is soft after rain, they can be pulled out quite easily. I am busy clearing a field of Smutsfinger grass that is being established. Once the grass covers the ground completely, the milk weed probably won’t grow again.

Cutting the weeds down doesn’t help though as the plant will just regrow from the cut stem. Pulling is the only way. Always lean down slope when you are pulling weeds and let gravity help you. Helps if you have a bit of counterweight in that region as well! 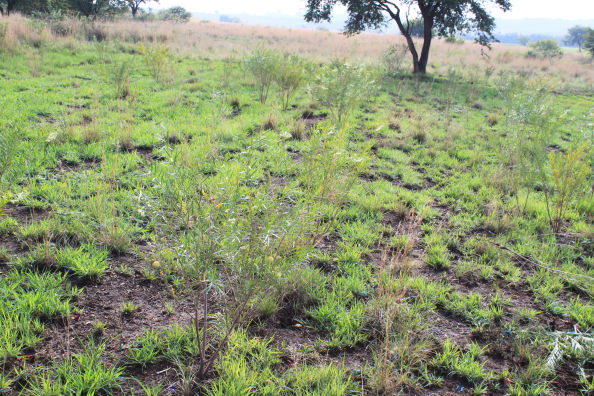 Pom pom weed is a very invasive weed in South Africa. It is common along road verges and in fallow lands but can also invade pastures and natural grazing. Once established it is very difficult to get rid of as it spreads by seed, as well as by rhizomes. The picture below is some that had invaded a lucerne field.

Pom pom weed was originally introduced as an ornamental plant, which then escaped into the wild. If people had been growing vegetables in their gardens instead of pink flowers, this would never have happened!

Sunday morning was spent with the whole family cutting off the seed heads and digging out the plants where possible, and spraying the plants with poison where the ground was too hard to dig them out. Here is a dung out plant showing the roots.

The plants are grazed by our goats, so they are not entirely useless, but they can reach a state where they push out all other plants, so I’d rather try and nip this in the bud, so to speak.