I am fairly sure that Silvopasture is the correct term for what we are doing, but it could also be termed land reclamation, or agroforestry perhaps? There were two stages to the process, firstly getting rid of the invasive alien trees on the farm, and the re establishing the natural trees to improve the grazing potential.

When we moved to this farm there was a lot of black wattle and blue gum (eucalytus) trees which are invasive in South Africa. They have a use in that they provide firewood and wood for other purposes like fence poles etc, but the ground underneath is degraded and the grazing quality severely depleted. Blue gums transpire a huge amount of water and depress the water table around them, drying out the ground, and black wattles form dense stands with almost no vegetation growth underneath.

Many years were spend cutting out the invasive species (providing a lot of warm winter fires in the process), and eventually the farm was clear of them. It is a long and laborious process to remove the trees, and a good chainsaw is essential.

For blue gums the trees need to be cut down and the stumps poisoned. Fortunately the seeds only seem to last in the soil for about two seasons, so the trees stop regrowing from seeds after a while. It stands to reason then, if you are trying to remove these trees, to get rid of the large, seed producing trees first, and then tackle the smaller ones.

Black wattles are more difficult. It is not generally necessary to poison the stumps of the larger trees, as they die when they are cut down. Small saplings are very resilient though and will regrow unless they are poisoned. Once a stand of wattles has been cut down, the sunlight on the ground causes all of the seeds on the ground to germinate like a carpet. I also noticed that after a grass fire it also induced the seeds to germinate en masse. To get rid of these, I applied a number of approaches.

Ultimately it was the continual application of all 3 methods over a few years that eventually eradicated them.  The picture below is of the last few that I cut out last year, with the wattle saplings coming up again amongst some taaibos and wild asparagus (katbos). These will unfortunately have to be poisoned as this is right next to our lucerne field, so there is no way we will persuade our goats to chew on tannin filled wattle rather than sweet lucerne! 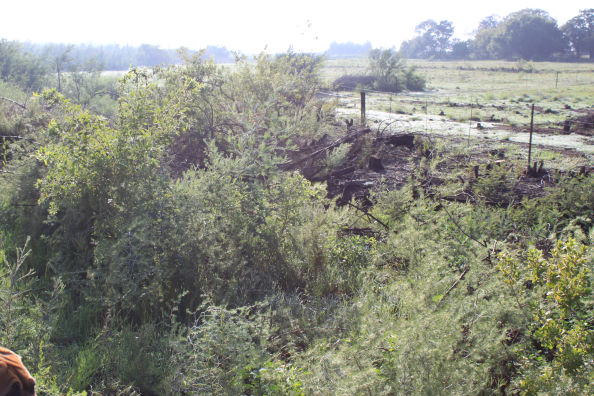 This picture is across our fence line. In the foreground you can see the cleared land with the stumps of the cut out trees. In the background is our neighbours land which is still infested with the invasives. It is a bit irksome as they continue to drop seeds over the fence which I have to keep under control.

When I stood under that big blue gum in the picture, I had no idea which way it would fall when cut, so I ring barked it rather than being squashed by a 30m tree! 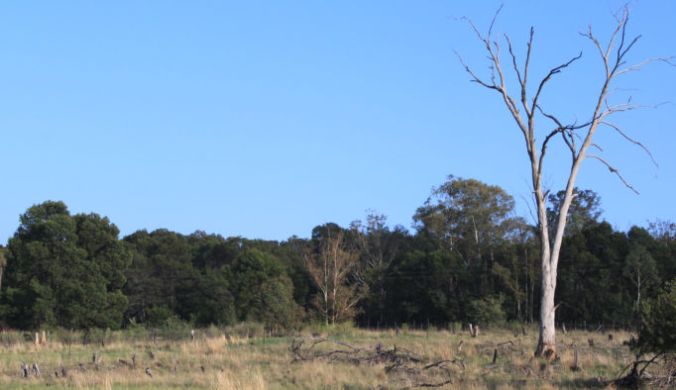 Once the invasive tree species were removed, the land was still degraded, and very poor for grazing. Also all of the stumps made it impossible to get in with the tractor to plough it and plant pasture. Some research on the internet brought me to the concept of silvopasture where trees and livestock are farmed together.

But which trees to plant? The answer was actually quite obvious when I noticed that indigenous acacia karroo (sweet thorn) trees we starting to come up where the invasive trees had been removed.

Sweet thorn has a number of benefits:

We have some areas of natural bush which act as seed banks of a great variety of indigenous trees. Below are white stinkwoods and wild olive. 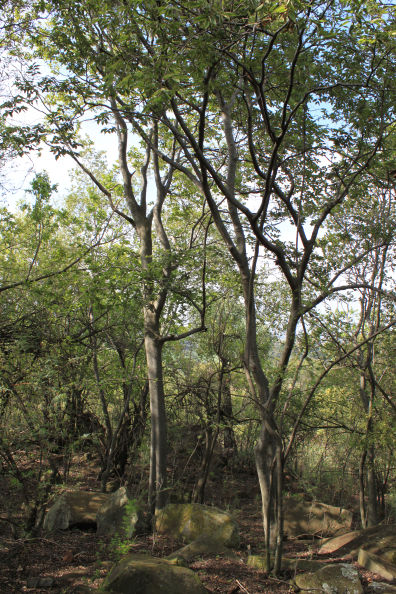 From observing the natural areas on and around the farm, it seemed to me that a tree spacing of about 10 meters was about optimal spacing for the acacias. At that spacing they don’t shade the ground too densely and allow other plants to thrive beneath them. Wider spaced than that and you don’t see the benefit of ground shading, and closer than that they start to form a thicket and inhibit plant growth.

Below is a winter picture of about 2 year old acacias starting to establish themselves amongst the blue gum stumps. 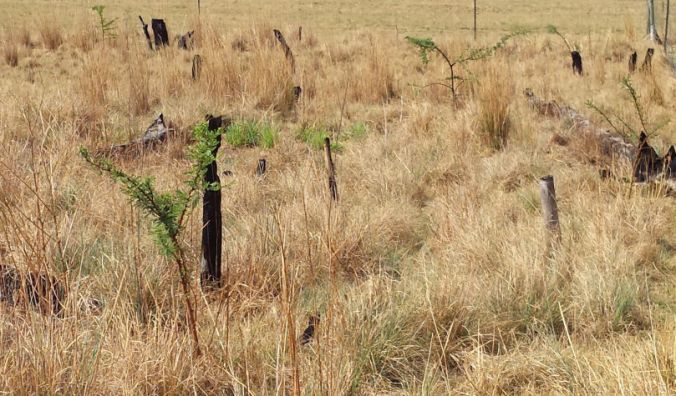 This is the same tree one year later in summer: 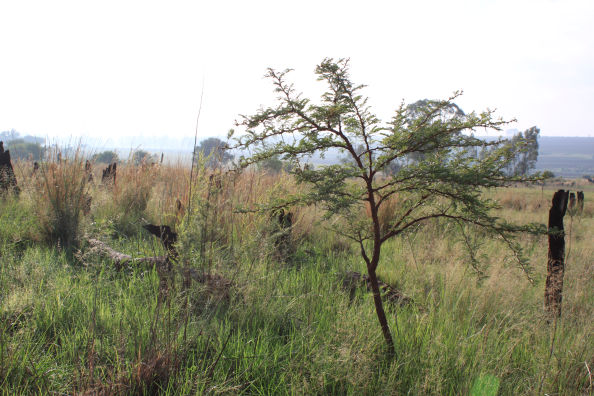 Eventually the idea is to end up with this. Large trees, grazed up to as far as the goat can reach, as well as nutritious grasses and other plants underneath. This is also a winter picture so the grass and other vegetation has been grazed short.

During summer the acacia karroo seedlings come up underneath the larger trees in great numbers so all you need to do is dig out the small ones, and re plant them. Note that they have a very deep taproot which grows very quickly, so once the seedling has more than two or three compound leaves, the root will be too deep and you will likely snap it off and kill the tree. The seedling below is probably about as big as you can transplant. Here are the steps:

Find and dig out the seeding, this one actually came up in our vegetable patch, then dig a small hole, loosening up the soil to as deep as possible so the roots can establish, and replant the tree. A bit of shade around the seedling helps, but otherwise it is as easy as that! 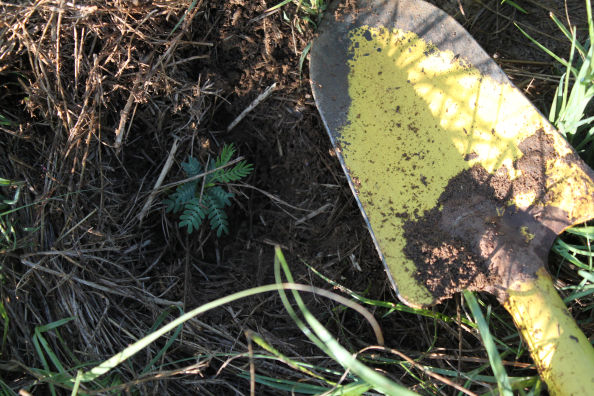 After about 4 years the trees should be about 2-3 metres high.

Acacia Karroo as an invasive species

In some areas, acacia karroo is itself considered an invasive species. This is generally in cattle areas as it is not grazed by cattle, but goats love it, so bush encroachment will not occur. Goats can actually be used to clean up areas suffering from bush encroachment.

Some more info on Acacias:

Acacia Karroo in the Karoo